Citations for our Newark, Italy and me as a film project, and 30% Off Books on Lulu.cpm 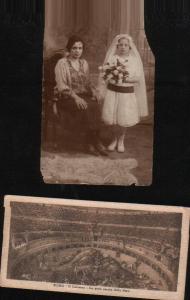 Basso Family about 1925 in Newark, NJ

we have received 2 new citations for our Newark, Italy and me as a film project, on Film Freeway.

Thank you, Mr. Quinn, for bringing the pre-21st century Newark once again to such sweet, happy life ... a rewarding, compelling, intensely-personally-felt trip down Memory Lane, indeed.”
— Virginia Hammer
NEWARK, NJ, UNITED STATES, November 24, 2022 /EINPresswire.com/ -- This Thanksgiving we are grateful for the support we have received in 2022.

﻿We are also delighted to announce that we have received 2 new citations for our Newark, Italy and me as a film project, on Film Freeway.

JUST ANNOUNCED
Newark, Italy and me (Lulu.com)
was Selected
by

Newark, Italy and me (Lulu.com)
Before the Pandemic, I had begun some work to use some of the Narrative History as a short film. There are sights I had chosen to film in some cases before they were demolished. This included the Columbus Monument on Broad St. that was demolished by the City of Newark in 2022.

We are beginning a campaign to raise money with these 2 Film Freeway selections that add greater momentum.

My Antonio Caruso/Tuosto Family in 1925 in The Newark Sunday Call. My Great-Grandparents and other relatives are all there in 1925. Antonio also donated a window to St. Lucy's Church dedicated to his Mother as they were from Capo Selle in the Province of Avellino outside Naples, Italy. They were all devoted to St Gerard and that legacy remains even today at St Lucy's Church to the right of the altar above the door to the Sacristy even today after 97 years.

Newark has many histories including G. Antonio Basso who emigrated from Italy to Newark, NJ in 1900. Antonio Basso was my Grandfather who came to America at age 14. Newark has many artistic roots including Armenia, Denmark, Germany, Ireland, France which are featured in Newark, Italy + Me. Immigration is a ongoing event. The past is indeed prologue to our present and future. Welcome to my Newark, Nevarca and the new old sod in New Jersey.

It's just a rapidly e'er changing mixture of eras we are so challenged to be negotiating, we Americans and we globally over-populated, fascinating yet always goofy-enough humans ... Thank you, Mr. Quinn, for bringing the pre-21st century Newark once again to such sweet, happy life ... a rewarding, compelling, intensely-personally-felt trip down Memory Lane, indeed" Virginia Hammer.

"American Phantasmagoria" includes 3 plays also on Lulu.com at 30% Off this week only.
Here is your code: VIP30
Use it for early access to 30% off printed products for our VIP early holiday sale. The code is good until November 24th.

Thank you for sharing your thoughts with The New York Times community.
Your comments have been approved!

The embers are already burning with sporadic flare-ups, mirroring as a House of Horrors from The White House like COVID-19. Djt as bullhorn never shuts up calls the Militia in as fireman in reverse. They don't put them out, they cause new fires. We have been in conflagration since 2015 all thanks to Djt and the Kentucky Senator, Barr and the rest of his henchmen. I can hear Nero playing his violin as a ghost in DC.