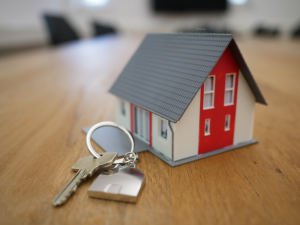 A small toy house on a table with keys next to it.

EAGLE MOUNTAIN, UTAH, UNITED STATES , January 25, 2023 /EINPresswire.com/ -- John Walden, one of the original co-founders of Eagle Mountain in 1996, officially handed the reins of his company to his daughter before his death. Real estate investor Tiffany Walden took over all duties after her father passed away from pancreatic cancer in 2017, and she’s been active in the community since.

The original co-founder worked with business partner Dr. Andrew Zorbis to create a community in an area they previously visited on vacation. Originally from Florida, there was an opportunity to purchase land in Utah at a low price while still being close enough to other desirable areas of the state.

This land became Eagle Mountain, and the community has grown considerably since then. According to the last census in 2020, it sat just below 50,000 residents.

It’s never been a perfect community, as John Walden had to make some big decisions to grow the community with residents, businesses, job opportunities, and more. Not everyone in the community cared for his decisions, but his confidence and willingness to take chances led to Eagle Mountain in the first place.

Tiffany Walden has stepped up in the last few years since he passed away in early 2017. One of her most significant decisions came when she helped bring Facebook to Eagle Mountain. They were looking for places to put a new data center, and the company picked Eagle Mountain over several other opportunities.

It recently announced a new expansion that will add about 2,000,000 ft.² to the campus. Not only does it generate tax revenue for the city, but it’s evolved into a significant employer.

Walden also operates her own business (Tiffany Homes) to offer customization and unique living in the area. Taking over for a co-founder can sometimes seem overwhelming, but Tiffany Walden hasn’t been afraid to take chances on occasion and see what happens.

Life has evolved quite a bit for Tiffany Walden over the years. When she was a young girl in Florida, no one could have expected that she would eventually take over the business. Not only has she taken over, but she's handled her success that has defied her new title.

Most potential clients in today's world must see examples and photos of work before signing up for their own customized home. To learn more about the business, visit tiffanyhomes.com to look through the multiple pages of finished homes. She has a ton of pictures to showcase the many stages of development.

Tiffany Walden is the daughter of John Walden, an Eagle Mountain, Utah co-founder. Her early life was riddled with struggles, but she developed a passion for real estate early in her adult life.

This led to working with her father for over a decade before eventually taking over her business and launching Tiffany Homes independently.